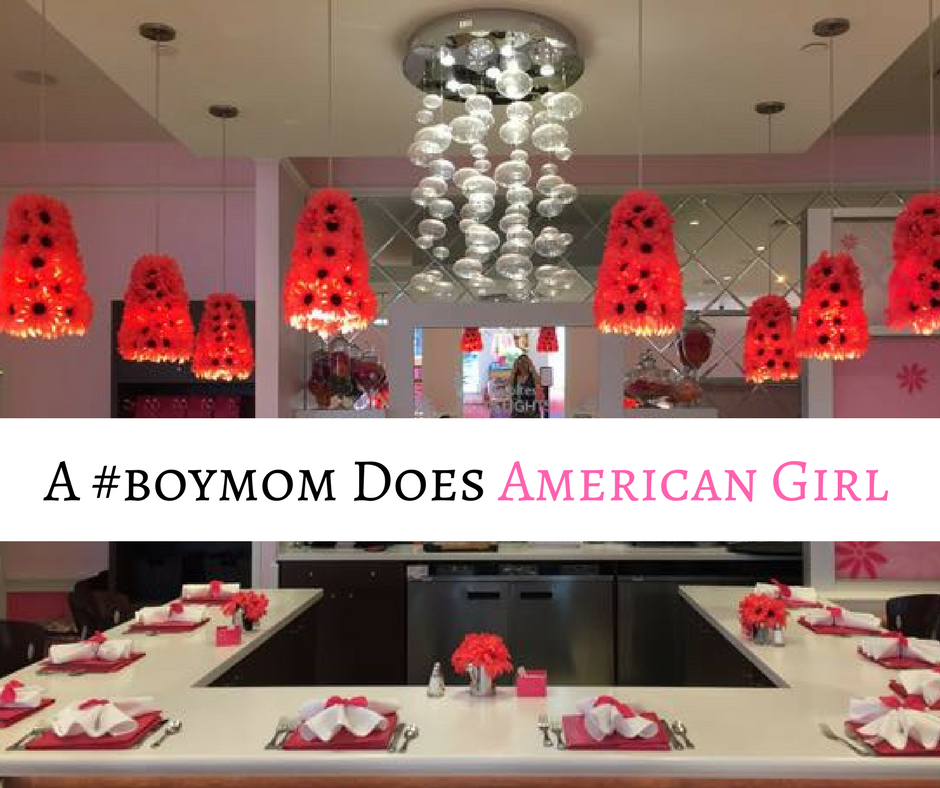 American Girl Columbus asked me to share some of their events with you – – which is right in line with What Should We Do Today? So I said, “sure!” Then they said I could bring my kids to one of their events. I said, “Sounds great!” I read through the list . . . tea parties, hair salon events, etc. Ahhh…this probably isn’t going to work with 2 boys! 😉 But luckily for me I am an aunt to an awesome niece who LOVES American Girl! Wouldn’t I be the coolest aunt in the world if I could surprise her with tickets for one of these events? (Now you know my true motives…) Well, I was the cool aunt for at least 24 hours (I think.) 🙂

In mid-June my niece, Ava, was able to attend a Doll Hair Salon Spectacular event where she learned how to style her doll’s hair, received some cool hair accessories, a snack and a goodie bag! 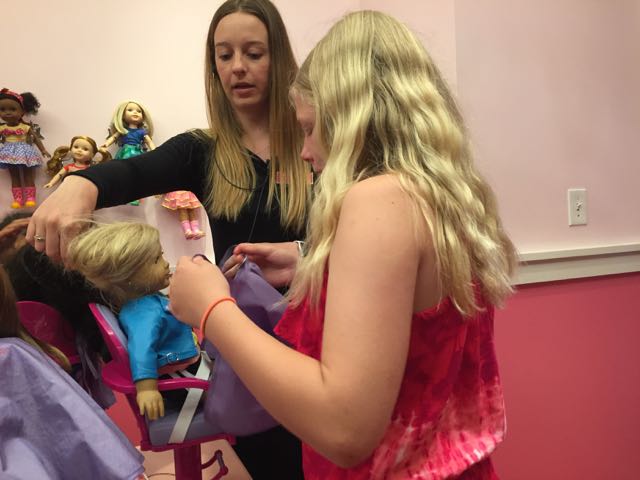 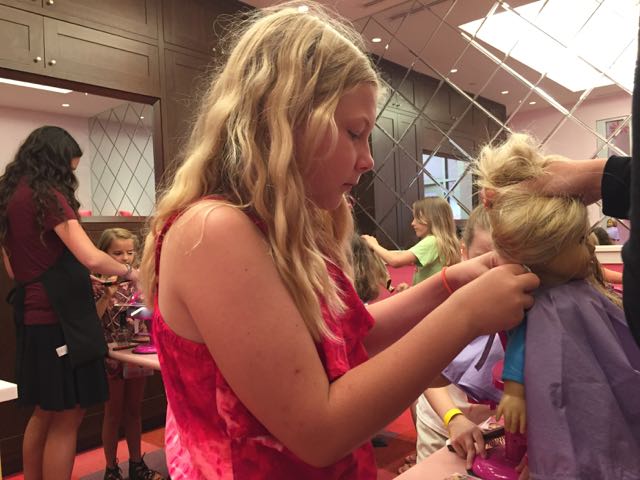 All of the girls arrived at American Girl at 9:00 AM – one hour before the doors opened. The event took place in a special room closed off from the rest of the store. Each doll had it’s own stool, cape and hair supplies for the duration of the event. While the girls learned how to take care of their doll’s hair and style it, the moms waited in the store (or if they were me, they went around trying to take fancy pictures). (Oh, lets be honest, they also snuck out for coffee!) 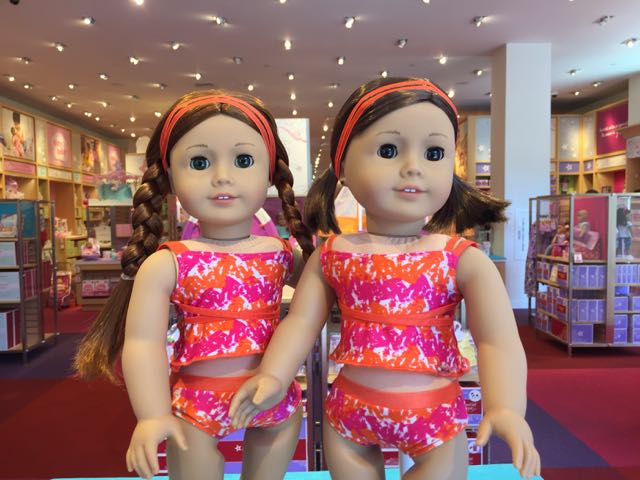 The first time I ever walked through American Girl shortly after they opened at Easton Town Center, I was overwhelmed! When I was growing up, the American Girls were just characters in historical fiction books I shelved at the library where I worked in high school. After that, I went off to college, went about my life, got married, had kids and then opened the door to American Girl at Easton. Obviously, I had no idea what had transpired with the American Girls since 1995! 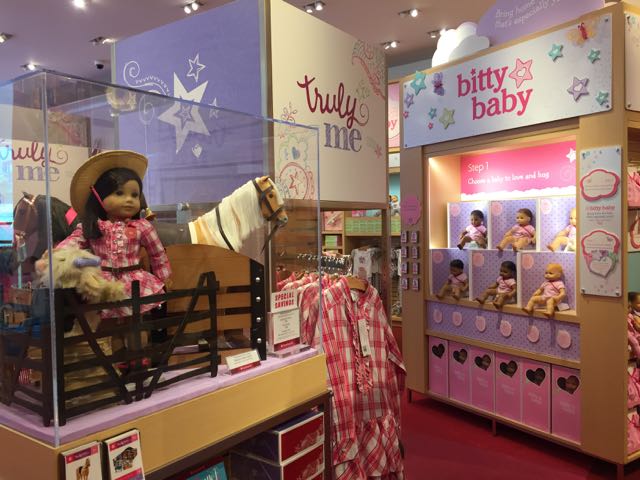 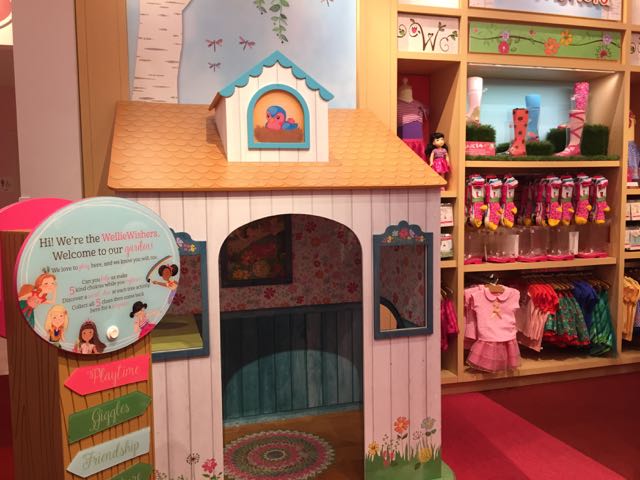 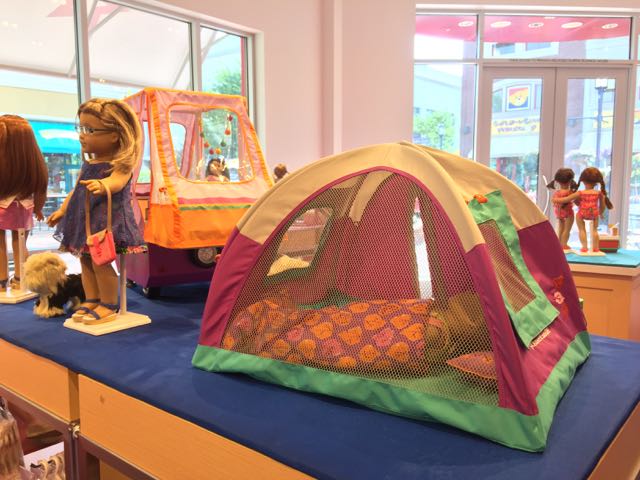 At first I was cynical. I’ll be honest. I couldn’t believe there could be so much stuff for dolls! But what I have since come to appreciate is that there are 10 year olds still playing with dolls. In fact, if you’ve been to Easton, you can probably attest that there are kids a lot older than 10 still into American Girl. And I can really get behind the fact that my niece, who could be doing all sorts of things that rush her into maturity at lightning speed, is still interested in dressing a doll, getting its hair done and hopefully learning some history and reading a book or two in the process! 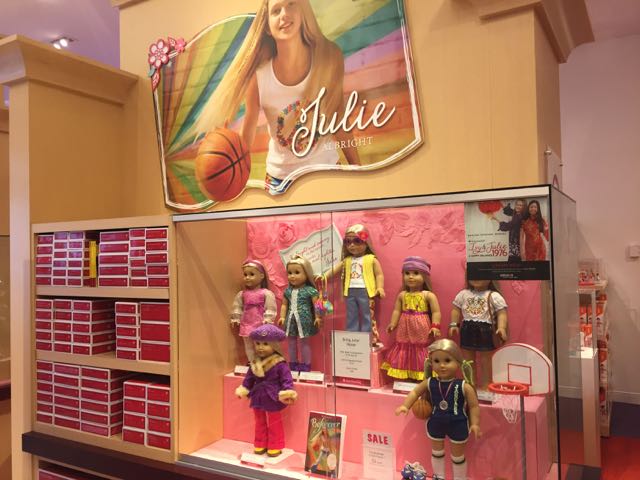 If you’ve stepped inside American Girl, you know it’s not cheap. But let me tell you, I was truly impressed with the value of the event. Now granted, in full disclosure, we didn’t have to pay for it, but the Doll Hair Salon Spectacular was $20. In addition to the experience of the event, what was included was Bright Highlights for the dolls hair (retail value $10), a snack of yogurt, fruit and a muffin, plus a goodie bag full of things like the American Girl Magazine, a paper doll, and a doll accessory. To me, that’s a deal! 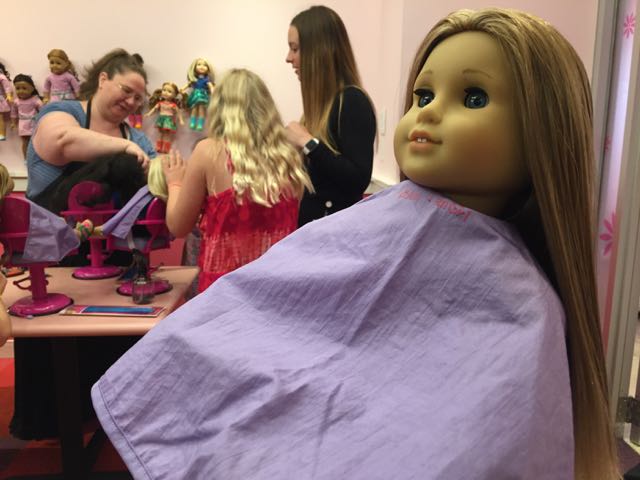 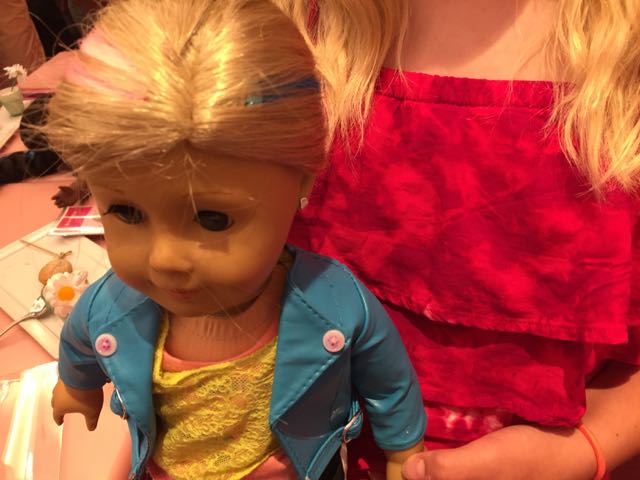 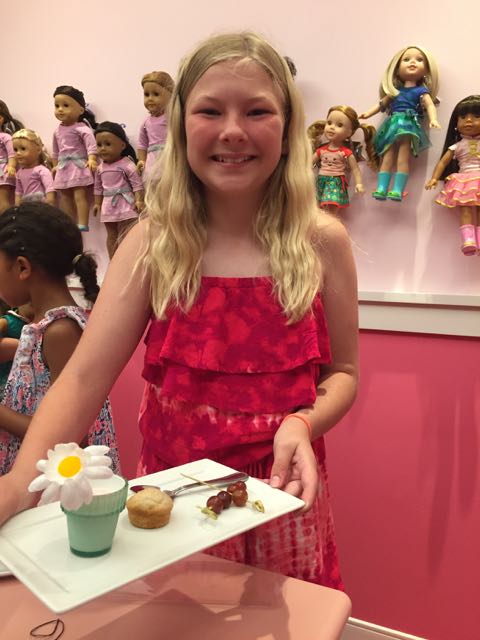 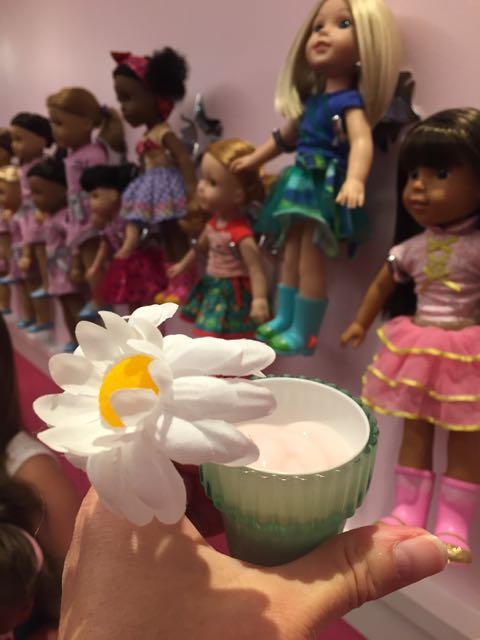 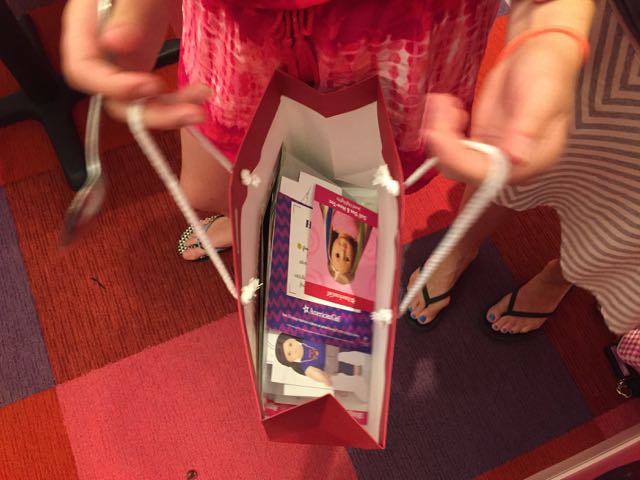 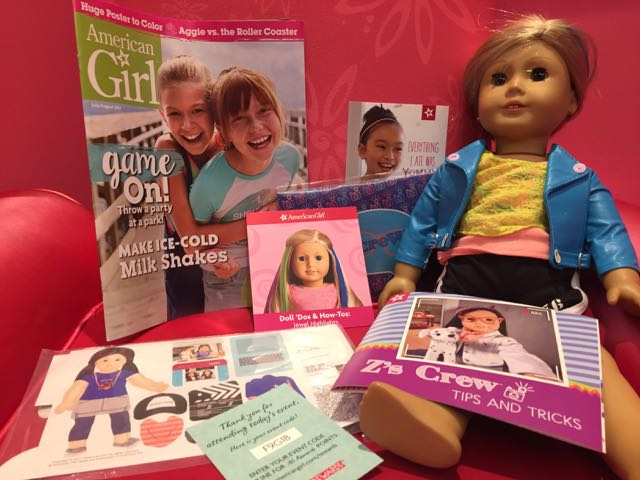 If you’ve been putting off doing something like eating at the cafe because of the price, an event like this would probably thrill your daughter even more for a great price! 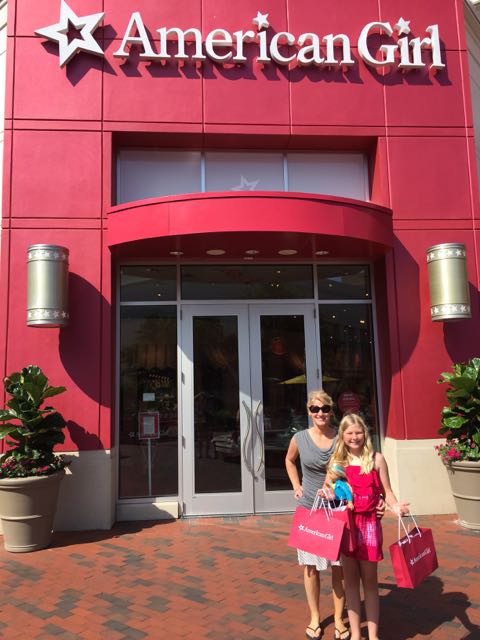 Looking to have an American Girl experience with a special girl in your life?

Your girl and her doll can also have a meal in the American Girl Bistro! Lunch, afternoon tea and dinner are served. Click on the links to see the menus! It is highly recommended that you make reservations in advance – which you can do from the website. 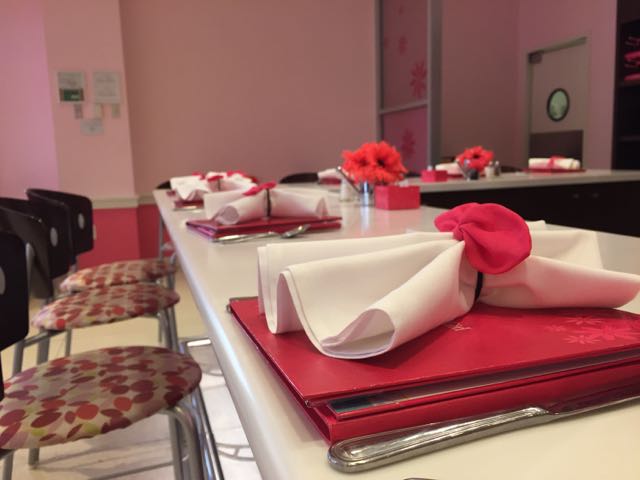 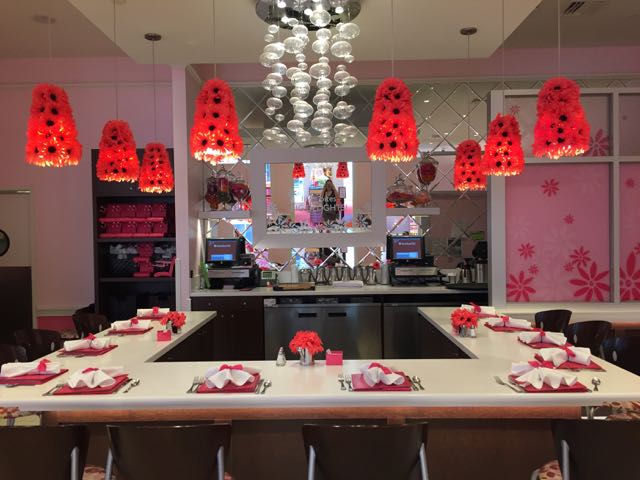 Dolls can also have their hair styled, ears pierced, a spa package, and nails polished. Dolls can also get hearing aids on one or both ears! See all services here. 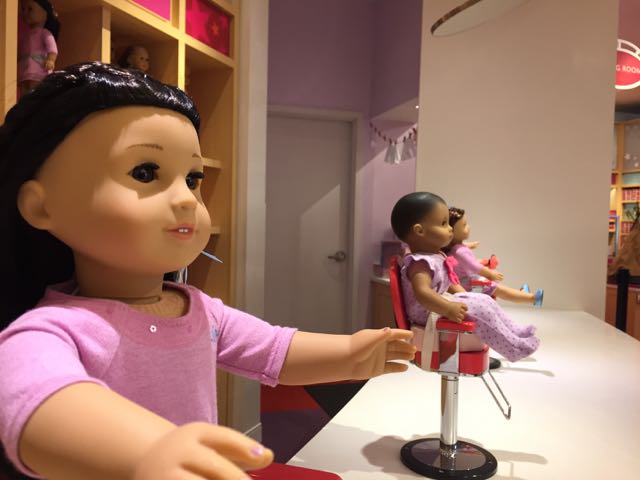 Thanks to American Girl for allowing me to be the cool aunt for a day! 🙂

ICYMI: 35 Free Things to Do with Your Kids this Summer in Columbus