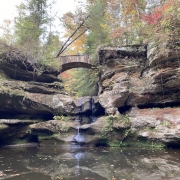 Hocking Hills is one of the most beautiful spots in all of Ohio! When hiking at Old Man’s Cave you will encounter some of Ohio’s most stunning scenery including water falls, caves and cliffs!

Old Man’s Cave is one of the most popular destinations in Hocking Hills. My family recently hiked this area and we were blown away by how beautiful it is! In this post I will answer some of the most frequently asked questions about hiking at Old Man’s Cave and give you an overview of some of the major landmarks to keep an eye out for you as you hike the trails! 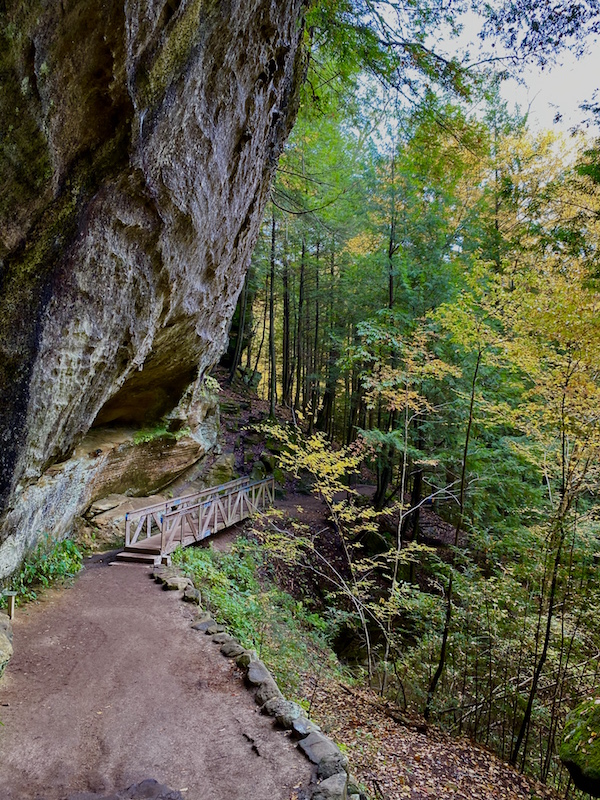 What is Old Man’s Cave?

Old Man’s Cave is a hiking area at the north end of Hocking Hills State Park and is made up of eight major trail routes. The main trail route in the area is Grandma Gatgewood Trail to Gorge Exit Trail and depending on where you exit it is 1 or 1.5 miles. Access to other trails is available along this path if you are looking for a longer or more challenging hike. 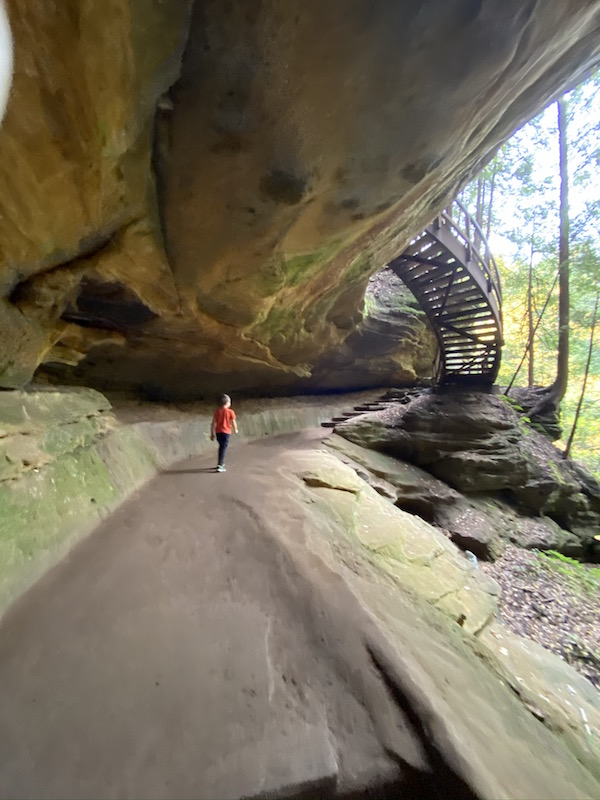 Old Man’s Cave is just one trails of Hocking Hills State Park but it is one of the most popular – and for good reason! The area is just full of beautiful sights and scenery. Old Man’s Cave trail a challenging but doable hike for families that will take at least an hour.

Who Can Hike the Trails at Old Man’s Cave? 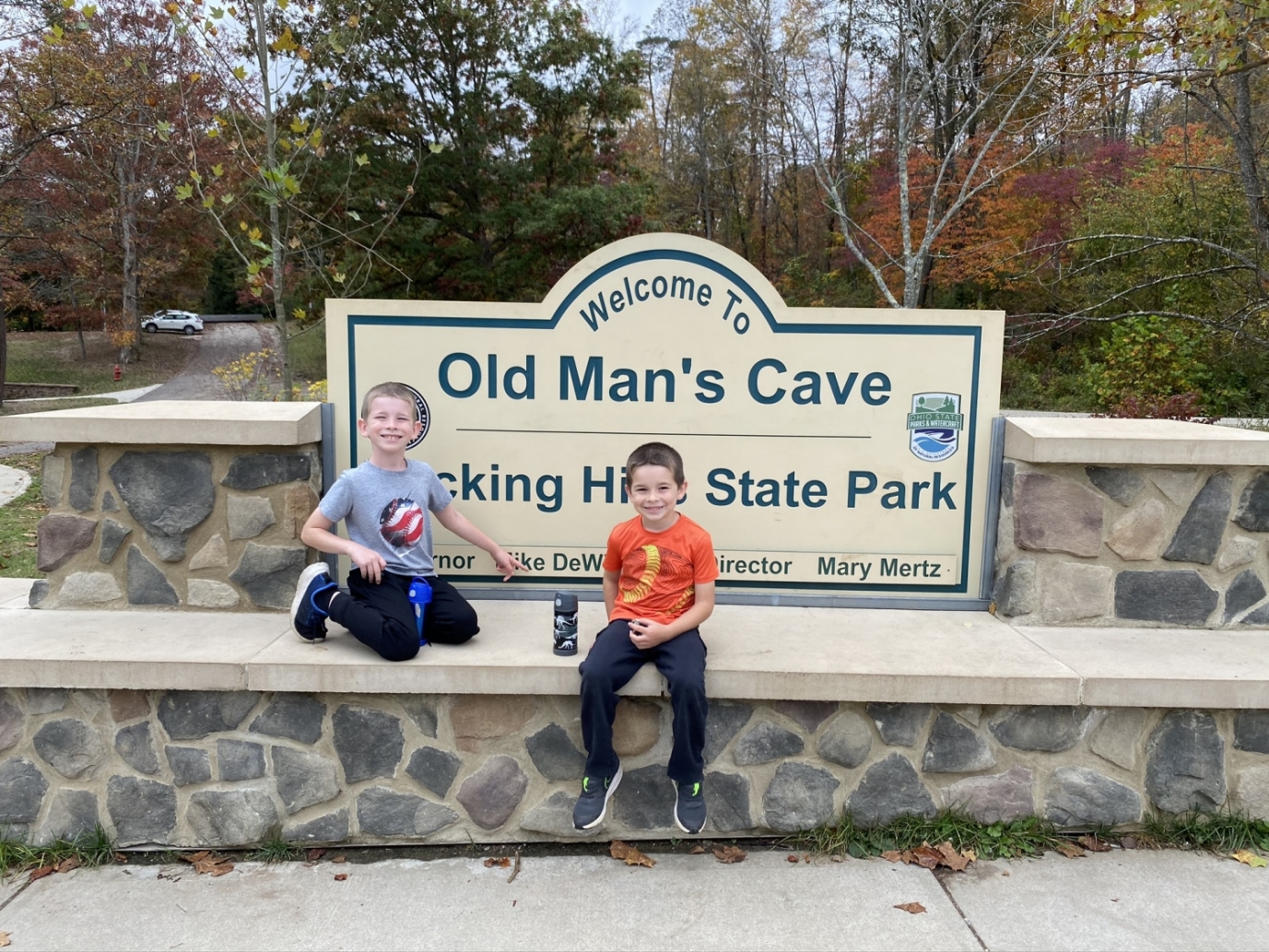 My family did this hike when my boys were 6 and 9 years old and they were able to do the hike without complaint! There are a lot of stairs and just one short but memorable ledge that did not have a railing. 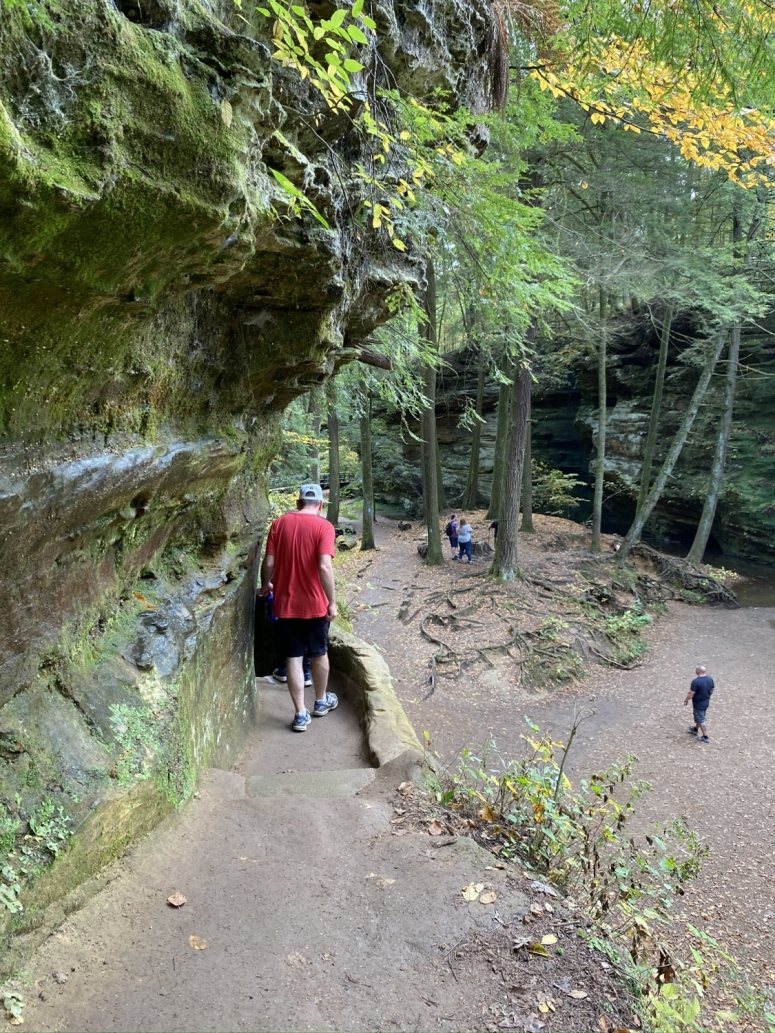 If you have a toddler you will want to keep them close. I do not recommend taking a stroller on this hike unless it is very light and you are prepared to carry it. There are a LOT of steps and uneven patches. We saw at least one abandoned stroller on our hike from someone who had given up using it along the way.

How did Old Man’s Cave get its name? 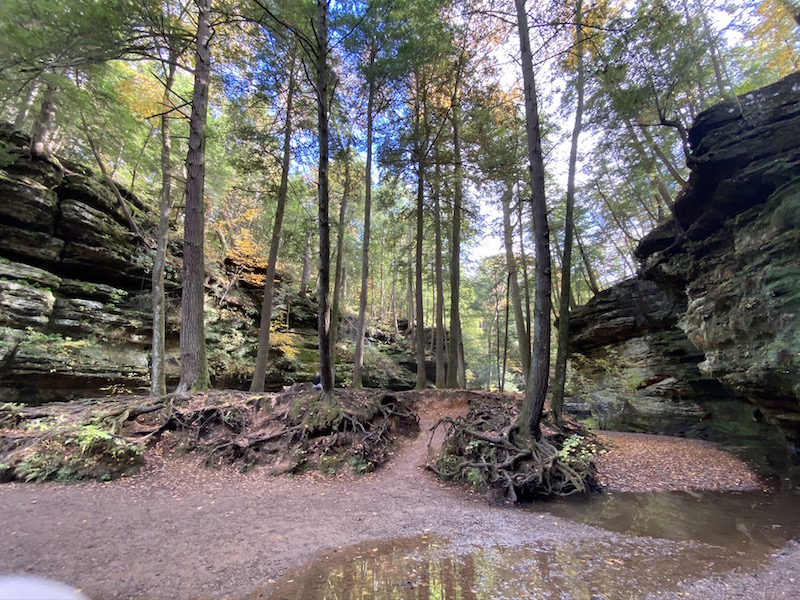 What is there to see at Old Man’s Cave?

We’ll spend a lot of time in this section because this is where the magic happens. There is so much to see in this part of the park. What follows is a list of some of the most popular sights to be seen at Old Man’s Cave. I’ve put them in order from the Trail Entrance at the Visitor’s Center. 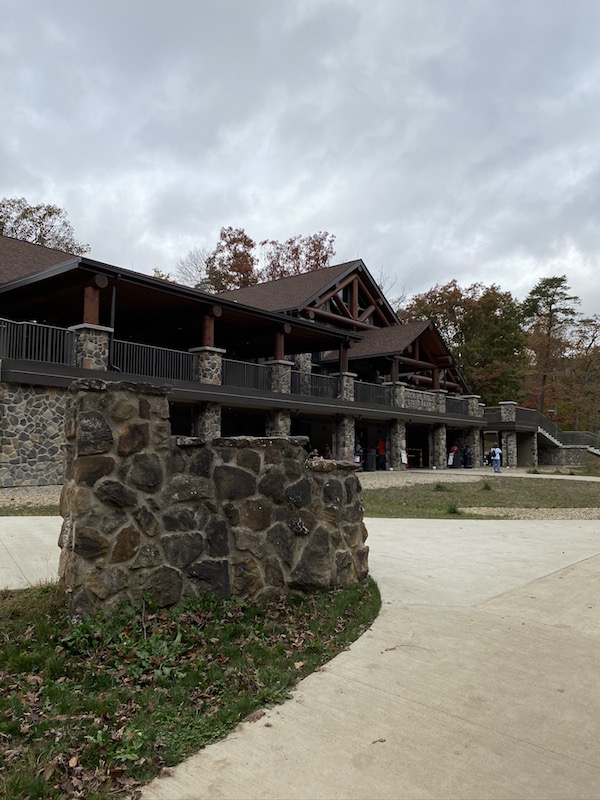 The most logical place to start is the Visitor’s Center. Start by picking up a map of the Trails of Hocking Hills State Park which will be a necessity when hiking the Old Man’s Cave area. There are restrooms and vending machines here. We visited in 2020 and the inside of the Visitor’s Center was closed so I will have to report on the inside details when we return. 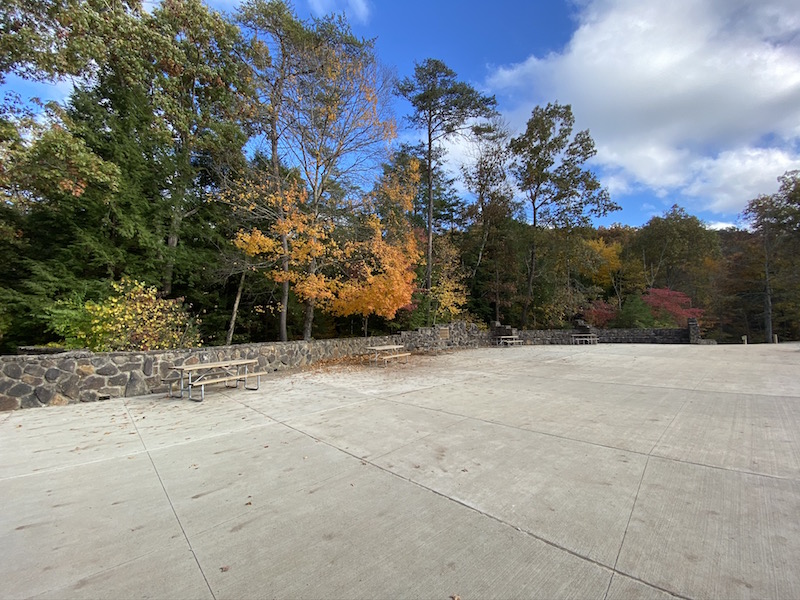 There are picnic tables here in this area. You won’t find any other picnic areas along the trail so this is a great place for your picnic lunch or sit-down snack. Plus you can return items you don’t want to carry with you to the car. There are also informational stations here so you can learn about Hocking Hills and Old Man’s Cave before you begin your hike.

Start on the one way trail here and walk north east along the edge of the parking lot. 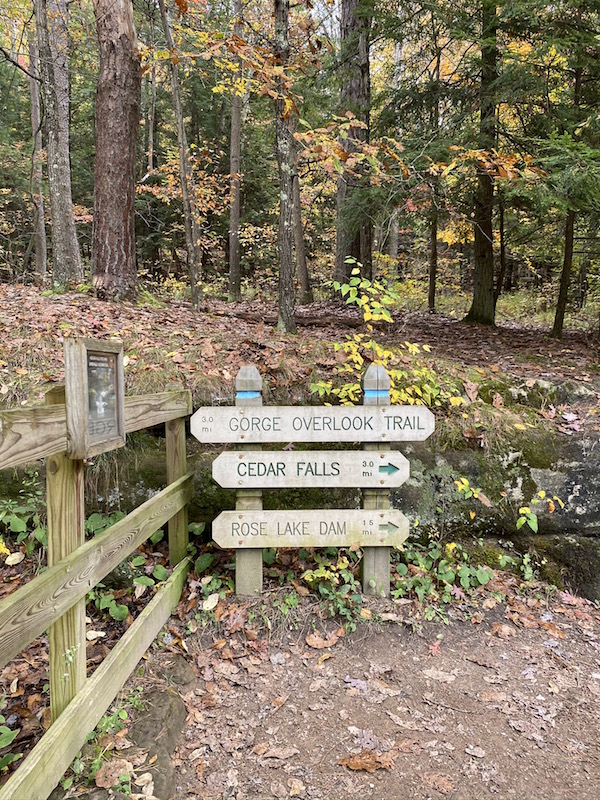 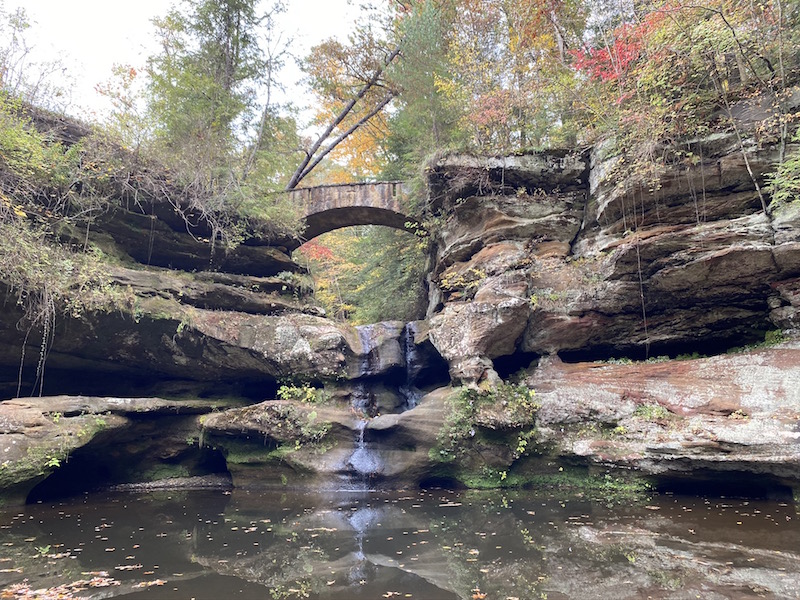 One of the most famous sights to be seen at Old Man’s Cave is Upper Falls. This stunning waterfall with a bridge over top is a worth a stop for a family photo. 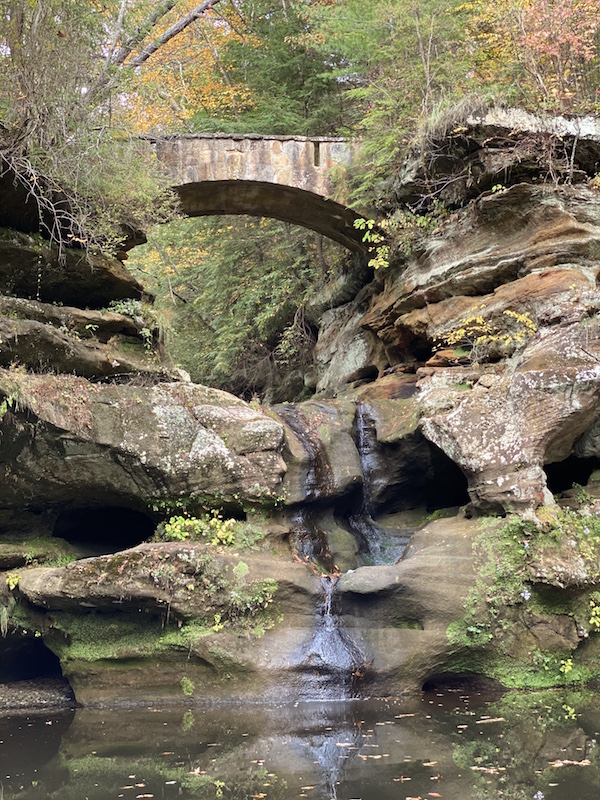 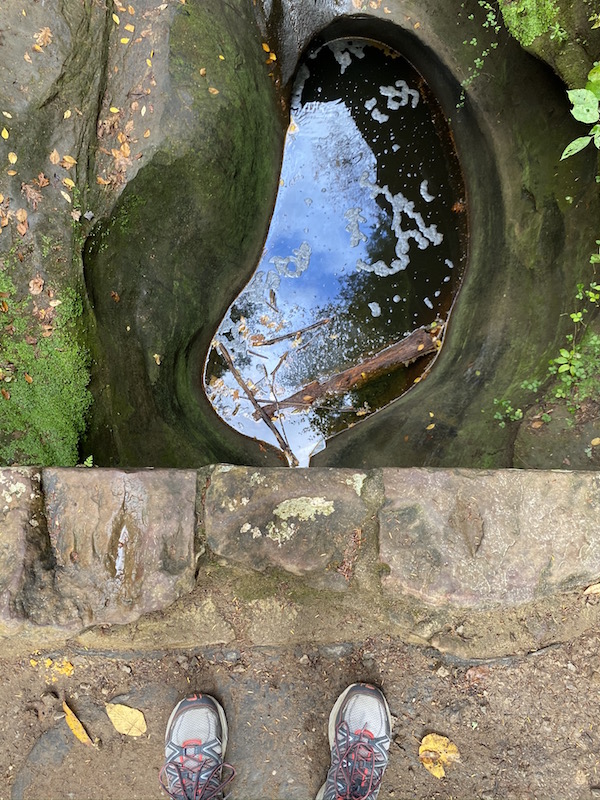 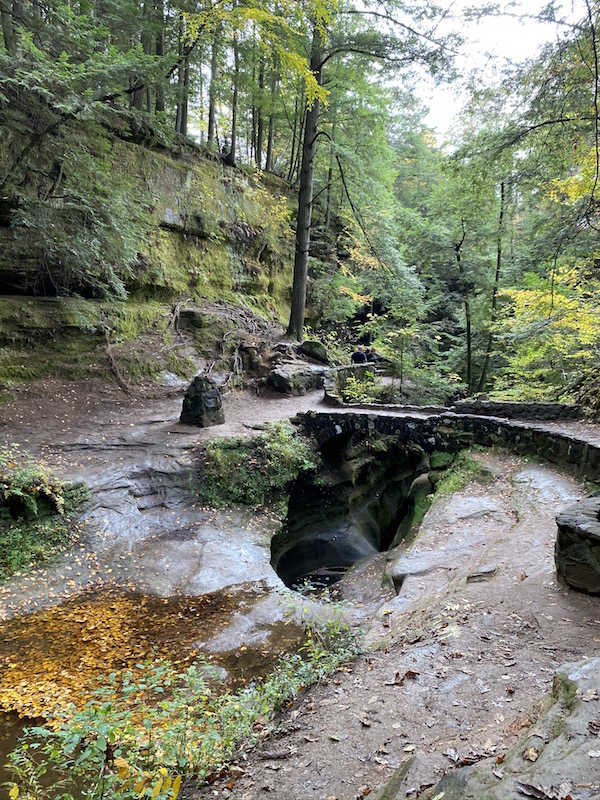 4. ‘A’ Frame Bridge Over Gorge 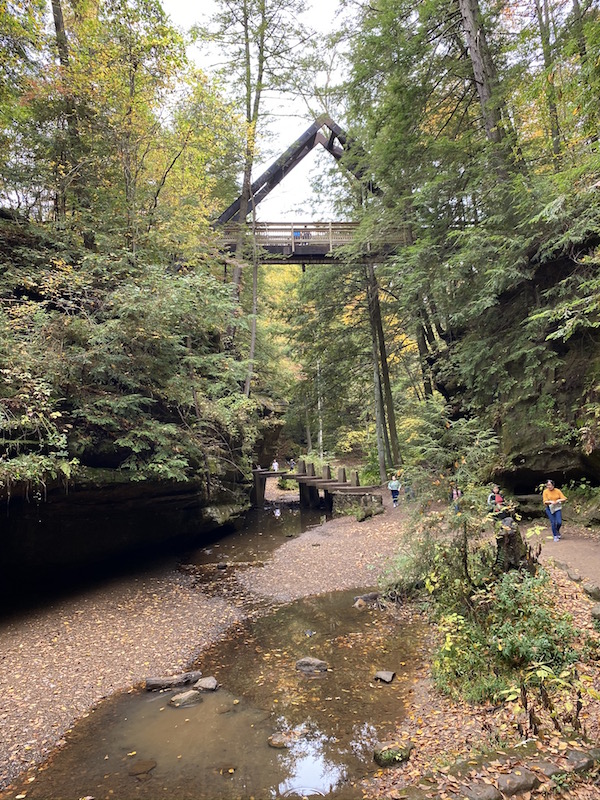 I love the man-made pathway here under the A Frame Bridge. This is another very picturesque area. You just want to stop and breathe it all in! 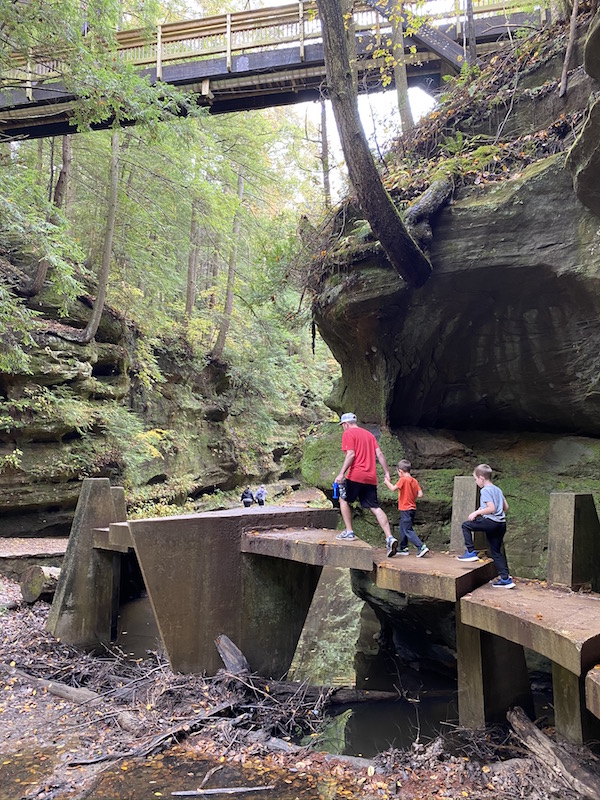 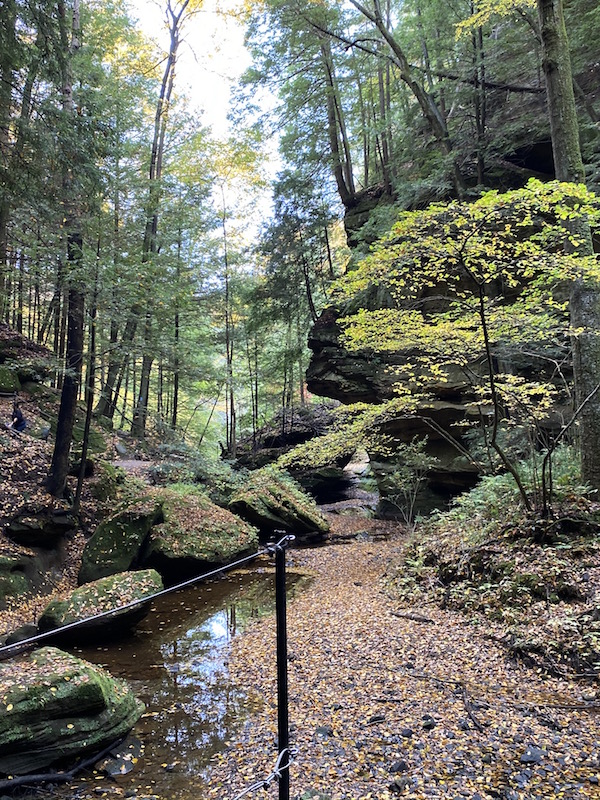 The Sphinx Head is a rock formation that looks like . . . wait for it . . . a sphinx head. If you look at the map, the Sphinx Head is technically further along the trail, but to appreciate it’s naturally formed shape, you view it from a distance. There will be a marker on the trail that will prompt you to look up and find it! 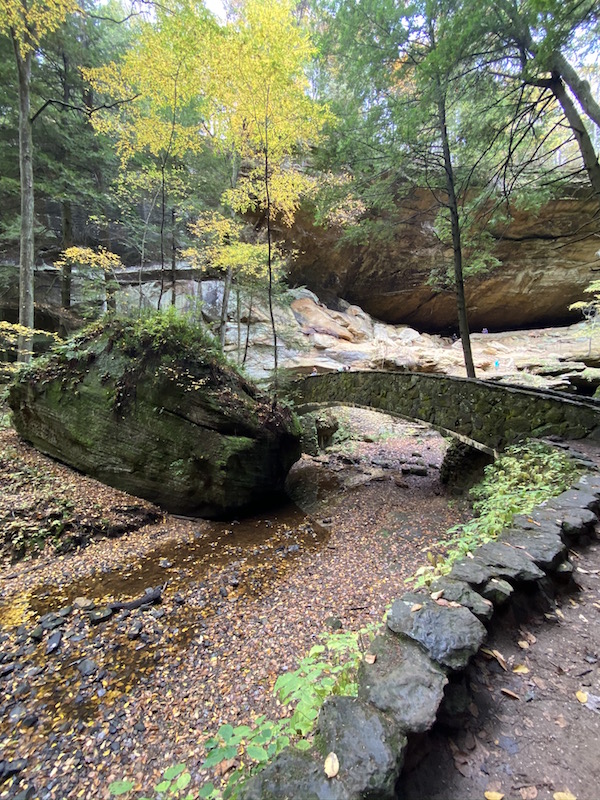 The Lower Falls is another of the most famous sites at Old Man’s Cave. Cross over this bridge that looks like it came out of The Lord of the Rings and head down to the water where The Lower Falls run over the rocks. 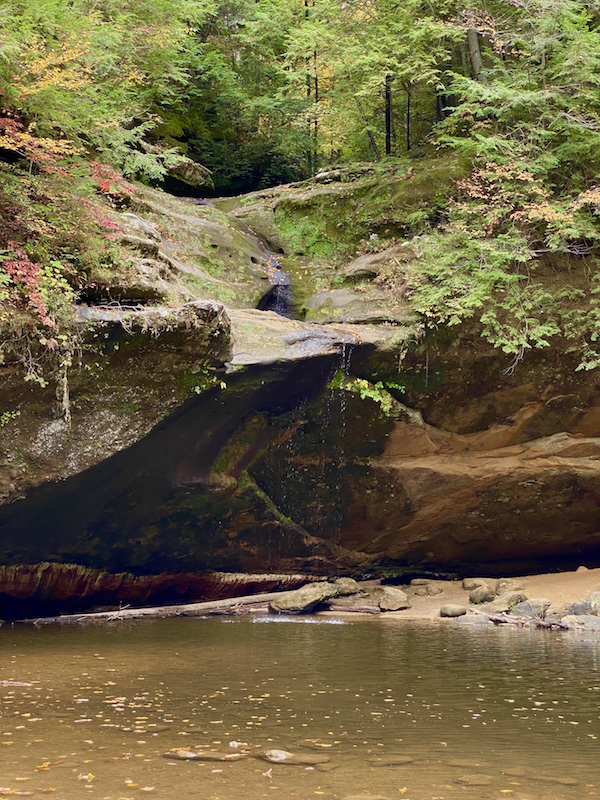 As with most Ohio waterfalls, what you will see will highly depend on the amount of rainfall we have had in recent days and weeks. I’ve seen pictures with the falls MUCH fuller than what you see pictured here. 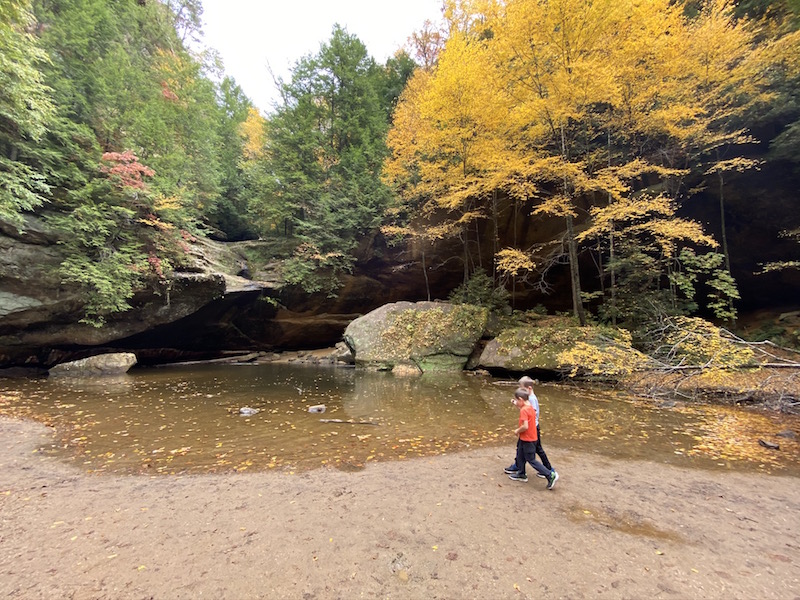 Shortly after Lower Falls is where you will transition briefly to the Broken Rock Trail. There are a lot of steps here. (You can also branch off for a hike to Broken Rock Falls.) Then you will head back towards the Visitor’s Center on the Gorge Exit Trail. 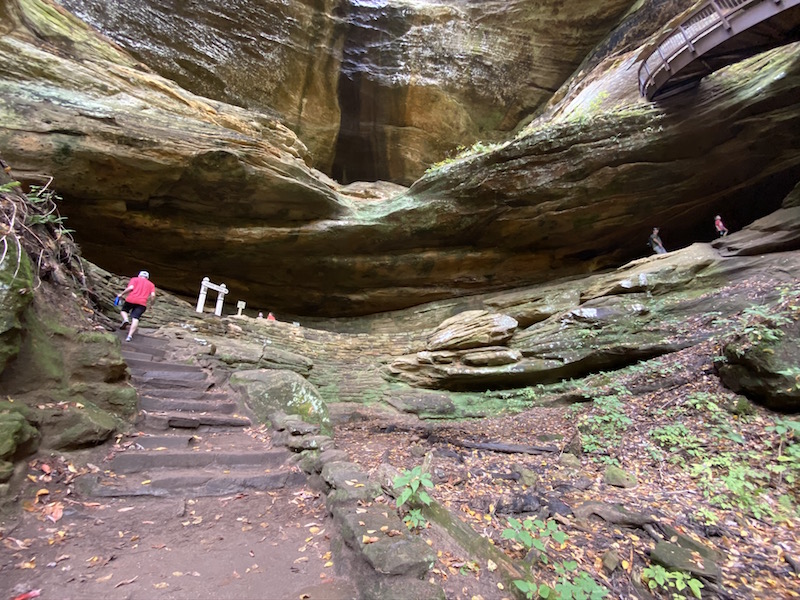 The specific area where the “Old Man” is said to have lived is a recess that was naturally carved into the rock in the gorge. 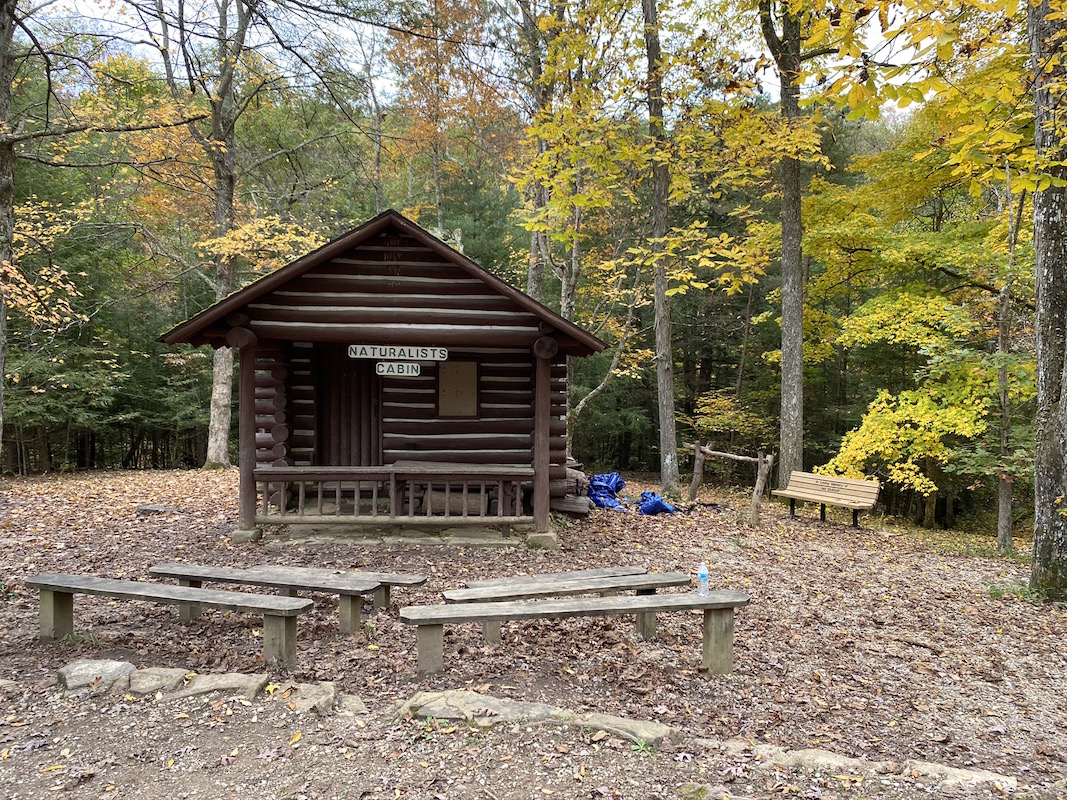 When you get to the Naturalist Cabin, it will be a sign that you are coming to the end of the trail and back to the Old Man’s Cave Visitor’s Center. Events and special exhibits are held here. 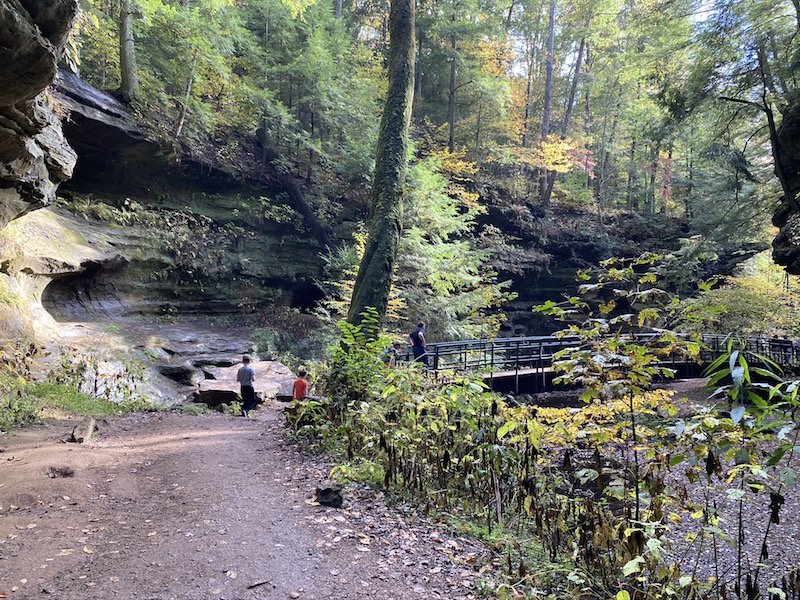 Where is Hocking Hills?

An interesting fact I learned from a sign in the park is that the name Hocking Hills comes from the Wyandot Indian word “hockhocking” and refers to the bottleneck shape of the gorge near Lancaster, Ohio.

How far is Old Man’s Cave from Columbus, Ohio? 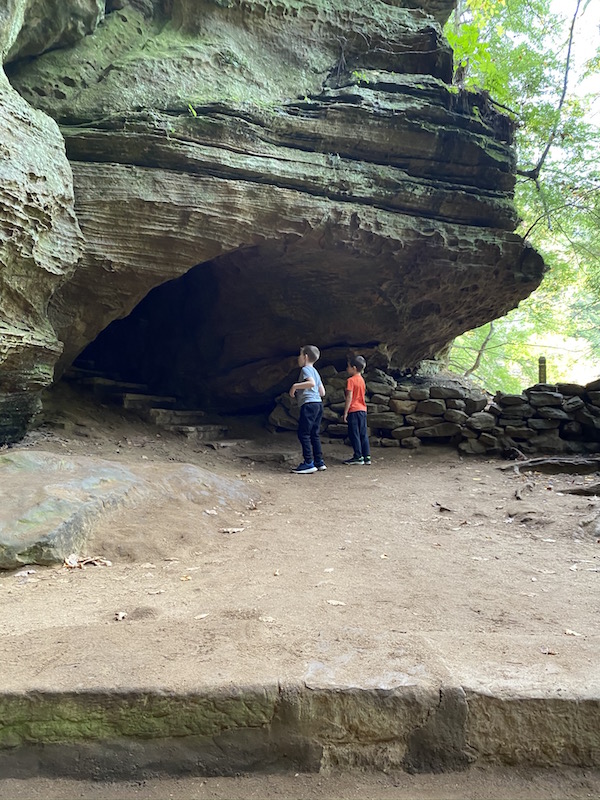 How long does it take to hike Old Man’s Cave?

If you search the general internet for how long it takes to hike Old Man’s Cave, the most popular answer is 1 hour. However, we are talking about hiking with kids here. We took a couple of breaks a long the way, especially at the waterfalls. I’d say we were in the gorge for 2 – 2.5 hours.

Can you swim at Old Man’s Cave?

Swimming and wading are not allowed in the waterfalls and creeks within Old Man’s Cave.

Old Man’s Cave is part of Hocking Hills State Park and all of the park is free to enter. Parking is free in designated lots. 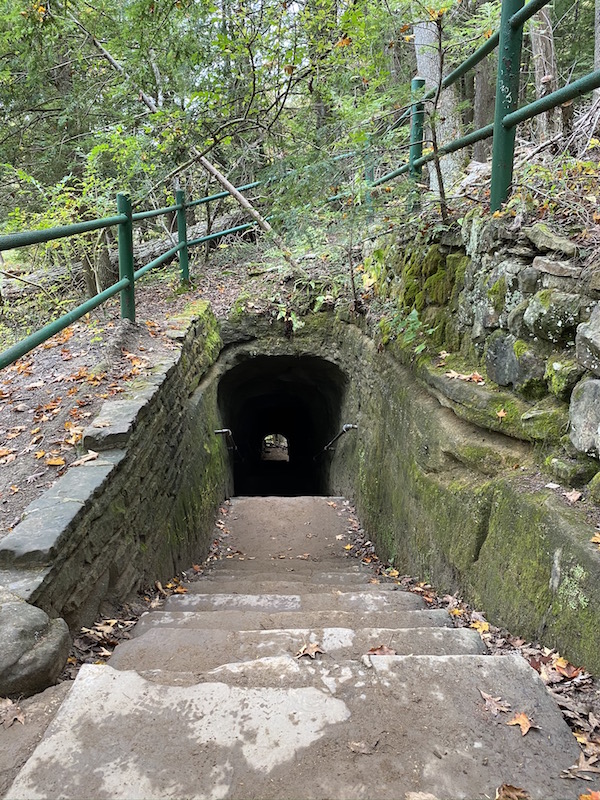 Dogs are allowed on the trail when on a leash.

You can visit Hocking Hills State Park from dawn to dusk. The park closes at dark. You should plan your trip so that you will be sure to be out of the park before dark! 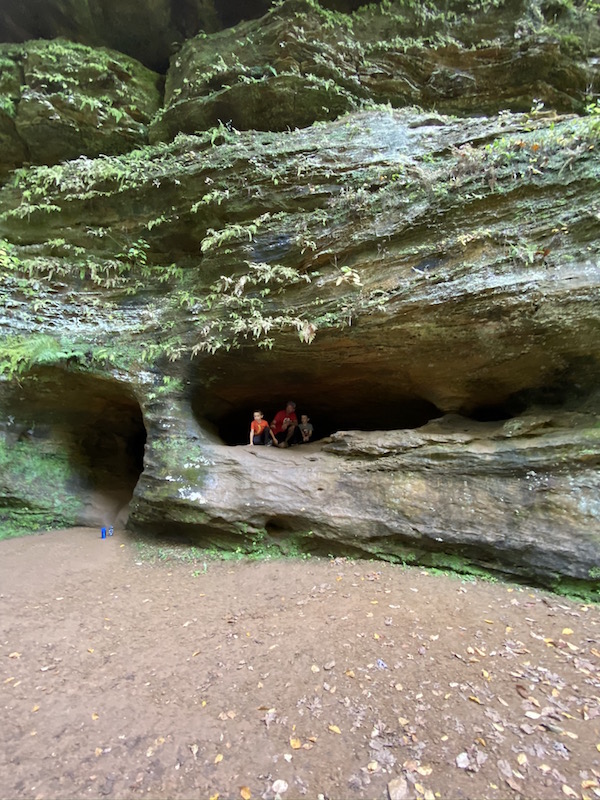 What should we bring on our hike in Old Man’s Cave?

It is important that you wear protective shoes when hiking at Old Man’s Cave. I would not do this hike in sandals or flip flops! There are a LOT of steps on this hike and most of the step areas are made of rock that can get slippery when wet. The park is also open during the winter and trails can get icy. 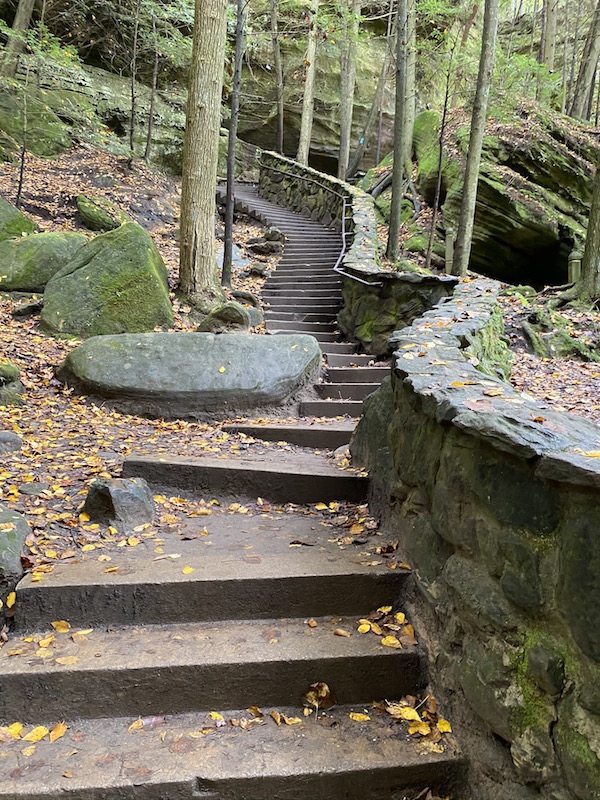 I would recommend bringing a back pack so that you can carry water bottles and a snack. But don’t plan on carrying anything too heavy unless you are used to hiking with a heavy pack. You won’t need too much more than water and a snack. Don’t forget sunscreen and/or a hat! 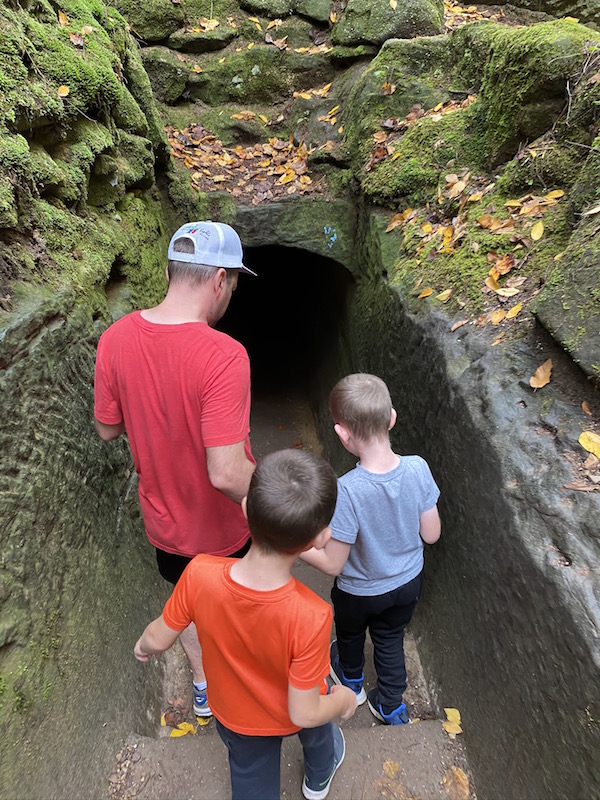 I hope you enjoy hiking Old Man’s Cave as much as we did! I can’t wait to go back!

If you’re looking for more things to do in Ohio try one of these posts:

This site uses cookies. By continuing to browse the site, you are agreeing to our use of cookies.

We may request cookies to be set on your device. We use cookies to let us know when you visit our websites, how you interact with us, to enrich your user experience, and to customize your relationship with our website.

Click on the different category headings to find out more. You can also change some of your preferences. Note that blocking some types of cookies may impact your experience on our websites and the services we are able to offer.

These cookies are strictly necessary to provide you with services available through our website and to use some of its features.

Because these cookies are strictly necessary to deliver the website, refuseing them will have impact how our site functions. You always can block or delete cookies by changing your browser settings and force blocking all cookies on this website. But this will always prompt you to accept/refuse cookies when revisiting our site.

We fully respect if you want to refuse cookies but to avoid asking you again and again kindly allow us to store a cookie for that. You are free to opt out any time or opt in for other cookies to get a better experience. If you refuse cookies we will remove all set cookies in our domain.

We provide you with a list of stored cookies on your computer in our domain so you can check what we stored. Due to security reasons we are not able to show or modify cookies from other domains. You can check these in your browser security settings.

We also use different external services like Google Webfonts, Google Maps, and external Video providers. Since these providers may collect personal data like your IP address we allow you to block them here. Please be aware that this might heavily reduce the functionality and appearance of our site. Changes will take effect once you reload the page.