My kids love trains! I have been to *almost* every place on this list! When Jaden was 3, he could have gone to Barnes and Noble every single day to play with Thomas. This list isn’t so much for your kids as it is for you! Of course your kids will love these places, but this list is to keep YOU from going insane from doing the same thing every day! 😉 A good number of these things are special events that are only available for a short time! So check the list and mark your calendars because many of those are coming up this month! You, too, can be a really useful engine! 😉

The train in the picture below is up nearly year round, but the one above makes a special appearance during the holidays! Check the link for info on Merry and Bright! 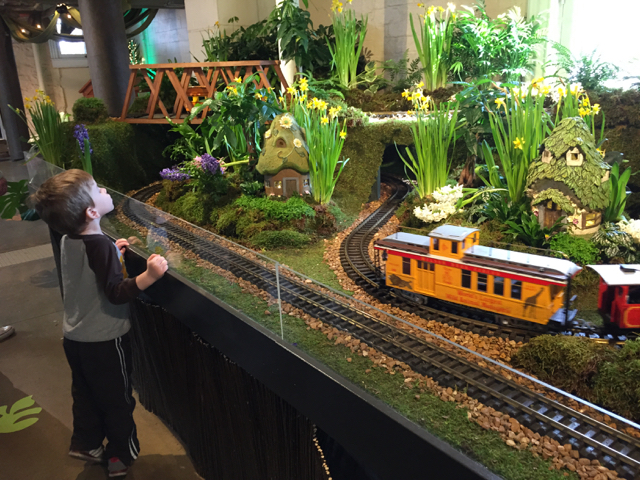 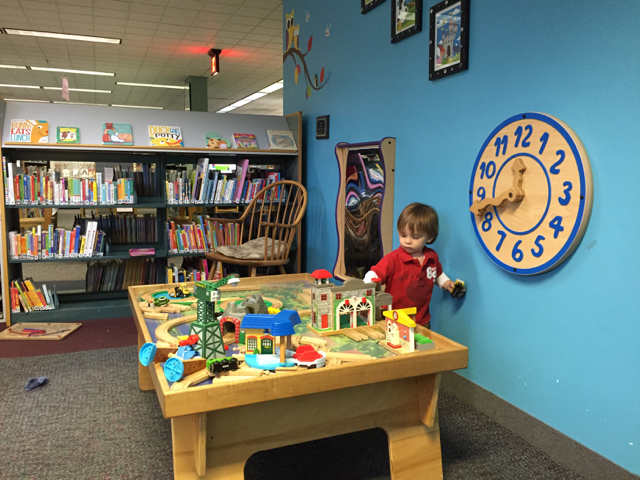 One great library with a train table! 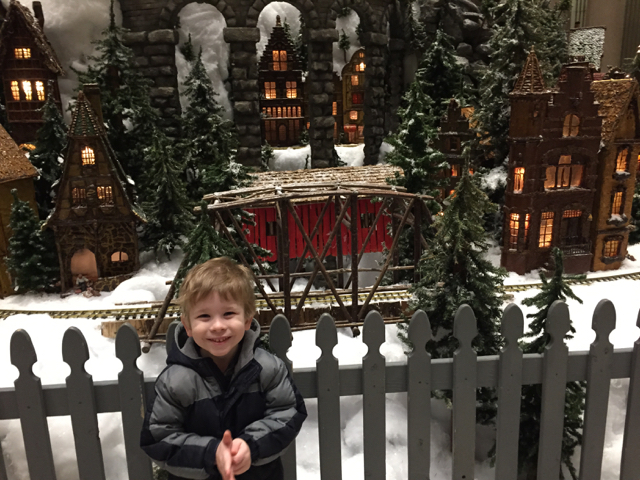 The Huntington Holiday Train arrives in mid-November and the Main Library hosts an Open House on November 30th, which will include hot chocolate and cookies, crafts and the lighting of Topiary Park! For even more trains, keep an eye on the Hilliard and Gahanna branches which will offer Polar Express programs this year!

The museum has been working on repairing the tracks so no train rides are available as of today, but they hope to be up and running for the holidays! 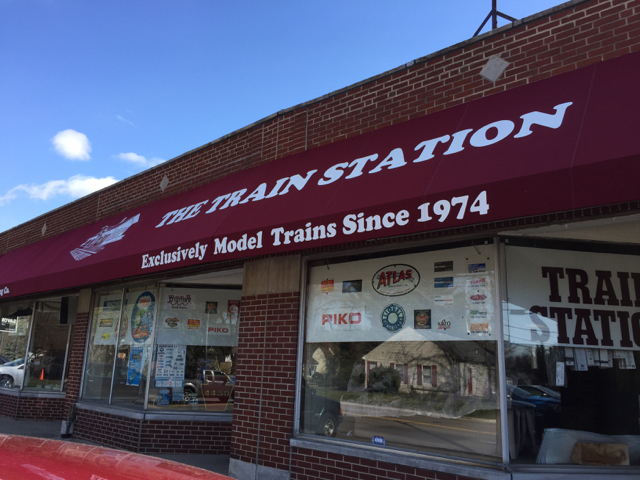 Model trains are for sale here and they also have a small play area for kids! 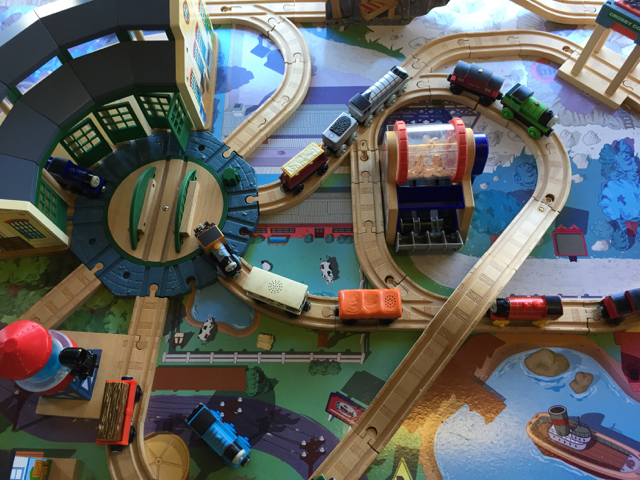 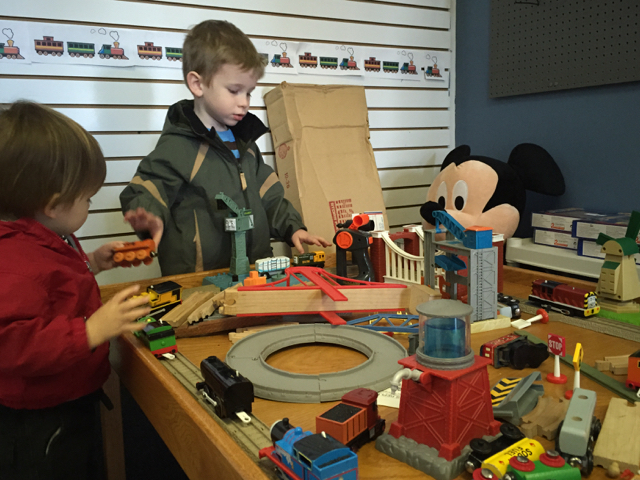 Model trains are for sale here and there is a train table for playing. On Saturday, December 3, 2016, they will host the 2nd Annual National Lionel Train Day which will feature prizes, face painting and a visit from Santa! 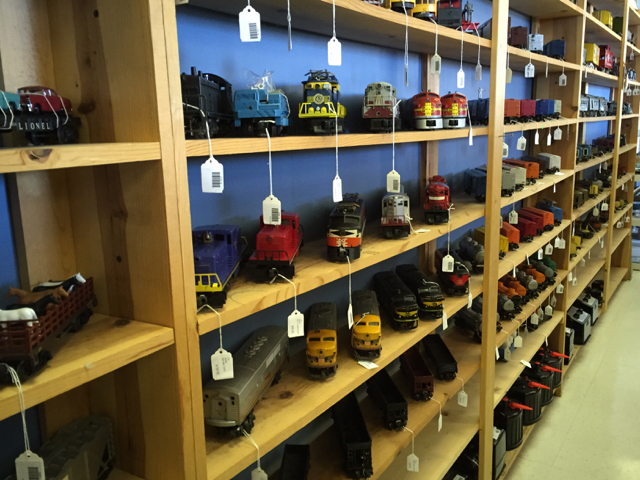 Model Railroad Days are November 16-20, 2016 this year and large model train sets are available for viewing and there are also trains to play with! During the weekend you can watch the movie Rocky Mountain Express in the theater. At Christmastime, The Polar Express is shown as well! (p.s. there is also a train to play with in the little kidspace at COSI!) 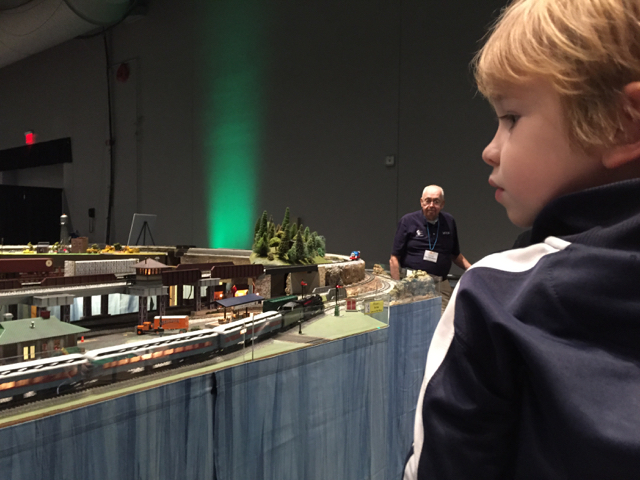 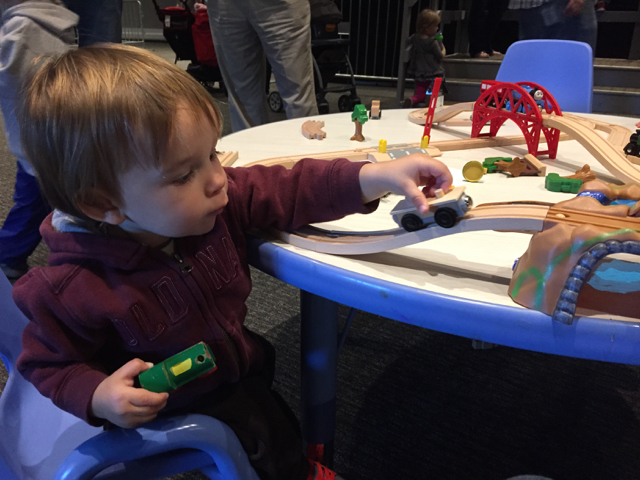 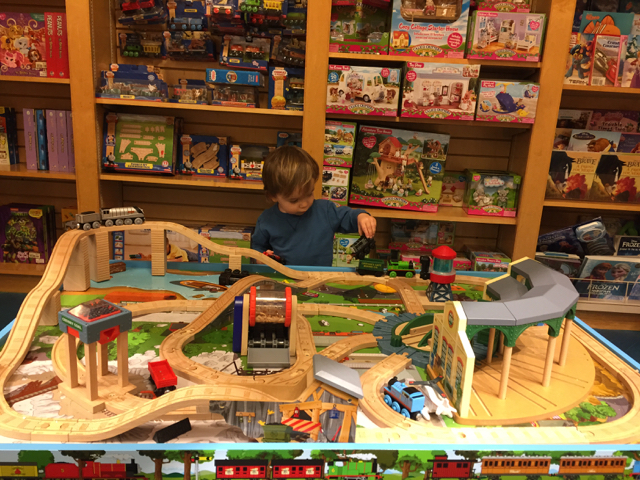 Barnes and Noble offers the hope that your children will play with trains while you quietly sip coffee and read a magazine. 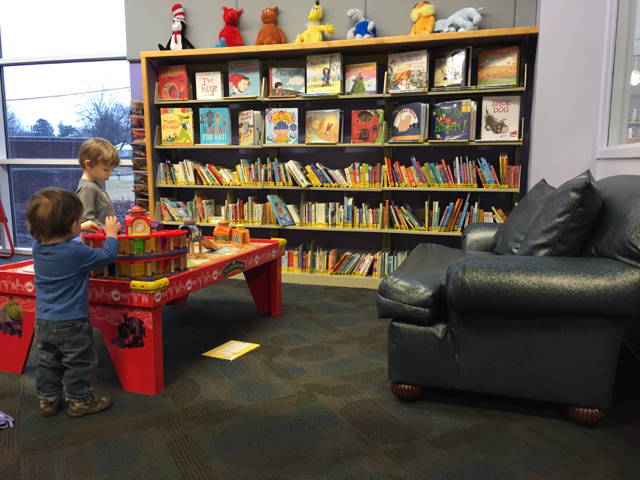 The Hilliard Branch is a fun library for kids and has a Chuggington train table.

In the children’s section of the store, there is a train that runs along the wall and a train table for playing! 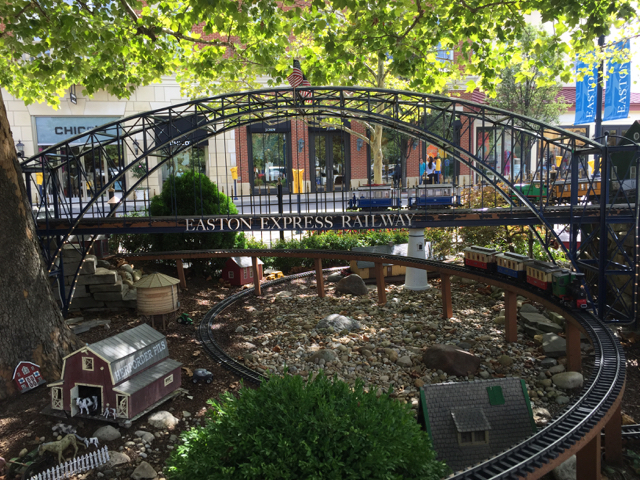 This outdoor train track is always decorated for whatever season it happens to be and is a big hit with the kids! 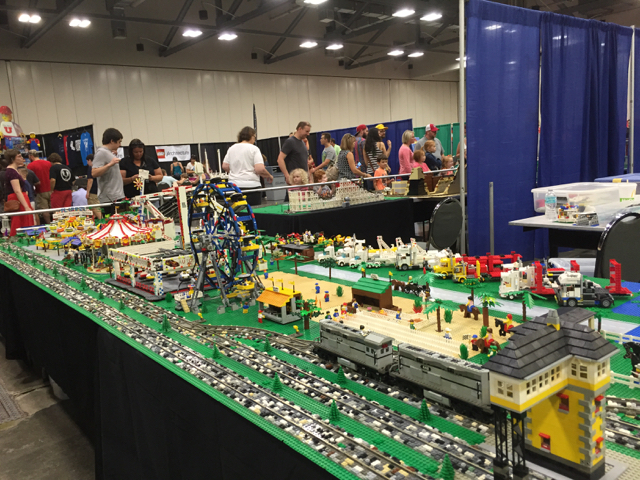 There are lots of working LEGO trains at this once-a-year LEGO Expo!

Model railroads are set up on these special open-house dates!

We stumbled upon this train track behind the offices at Inniswood. I couldn’t find any info on if/when it is used, but if you know, please leave a comment below! 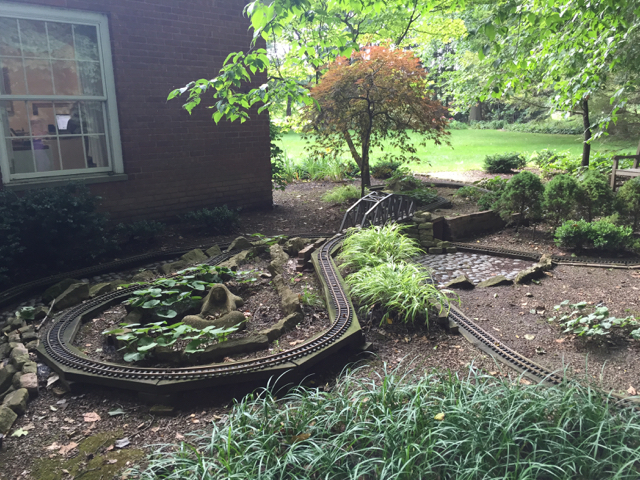 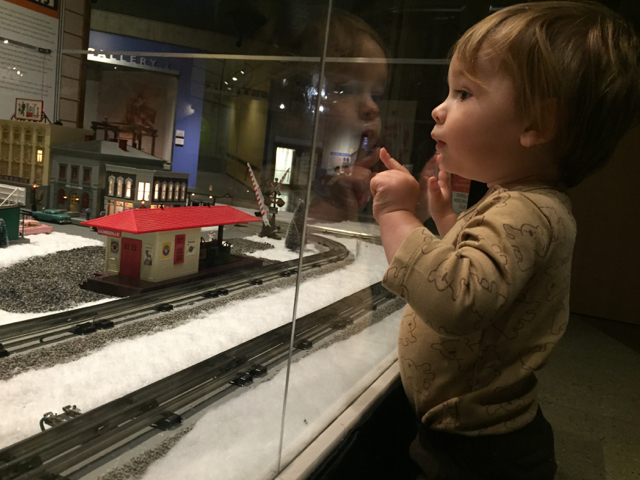 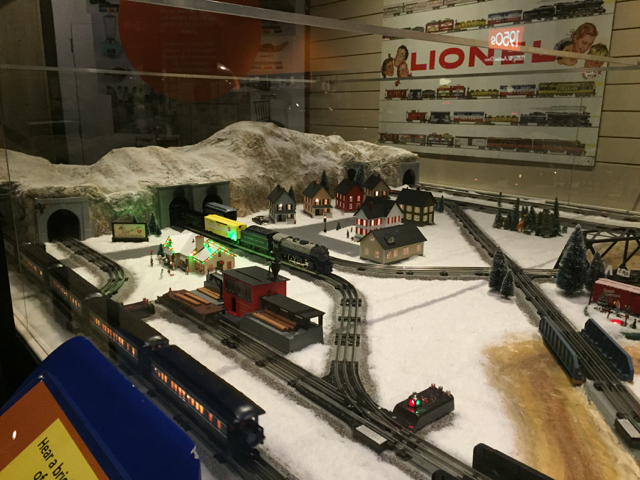 There are other trains on the grounds of the Ohio History Center year round, including one inside the building that can be sat in, and the one seen below that sits outside. 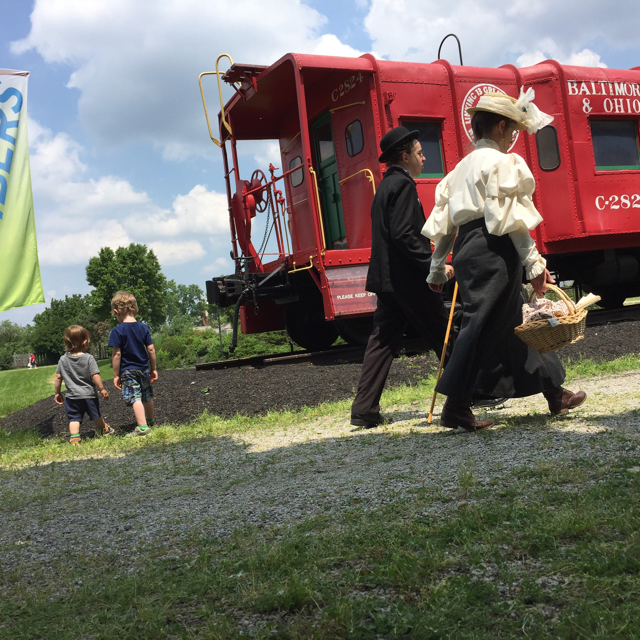 This is a great park with a train that can be played on! 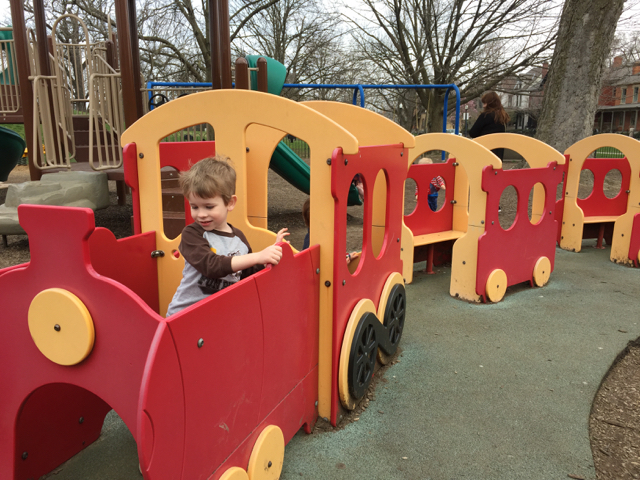 This park is affectionately known as “the train park” – and aptly so! 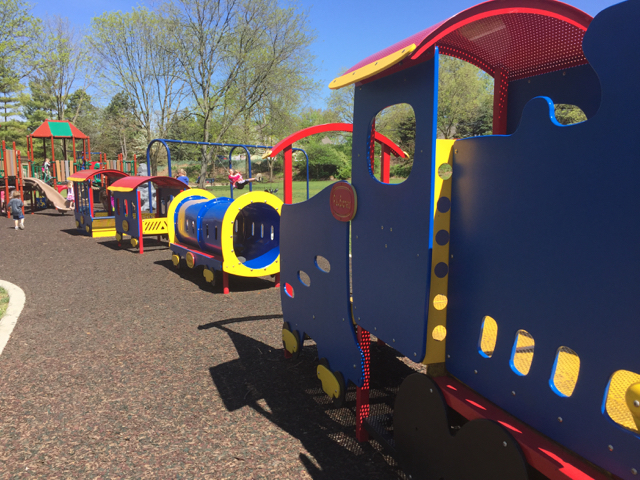 This park offers lots of vehicles to play on including a jeep, boat and this wooden train! 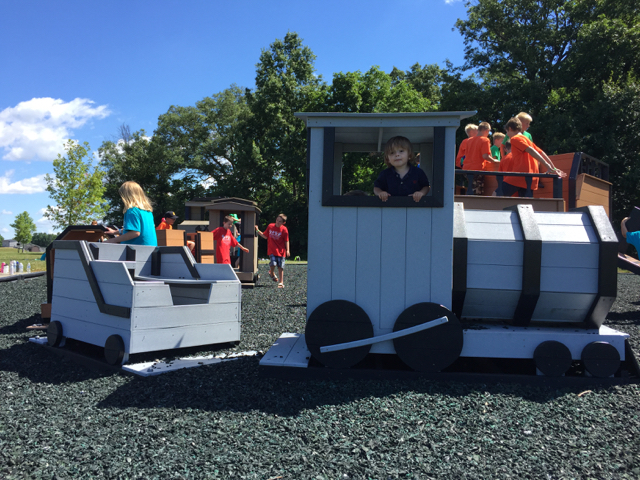 For $1 per person, you can ride a train around the North American exhibit at the zoo! 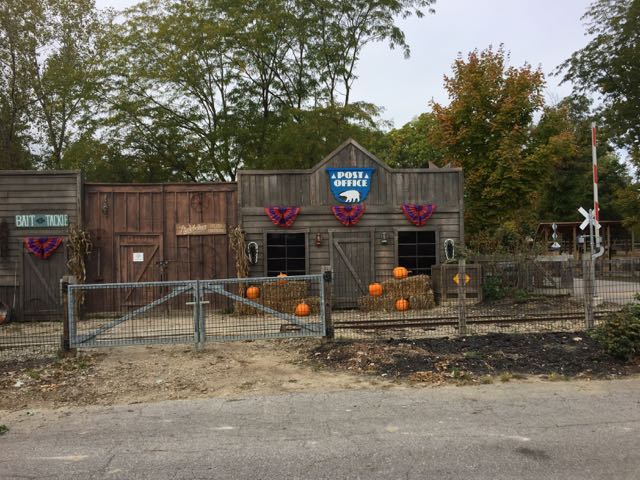 For 4 weekends in December, the club puts on an open house featuring giant model railroad layouts, an interactive Thomas the Tank Engine display and more! Admission is free!

On the second Sunday in September, members of the Columbus Garden Railway Society open their houses (gardens!) for a tour of their own Garden Railroads!

One of the larger exhibits at the Little Buckeye Museum is the model train display and nearby train tables for playing! 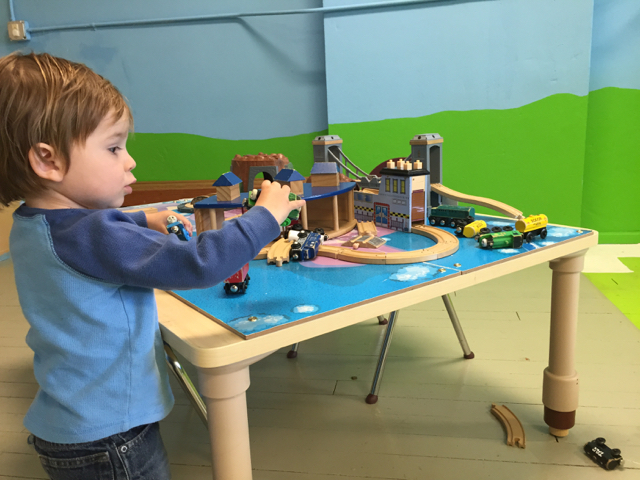 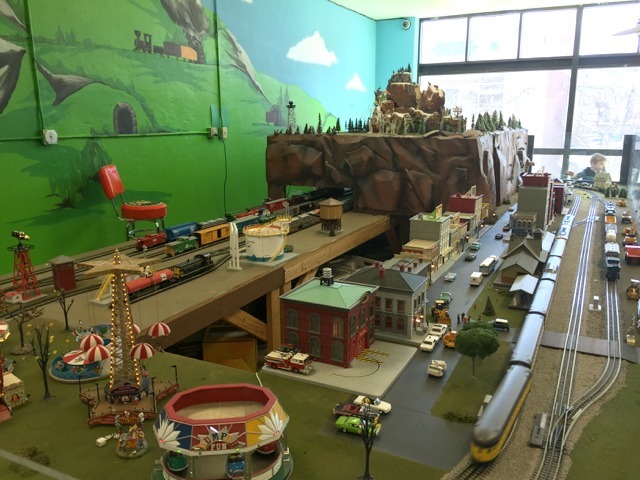 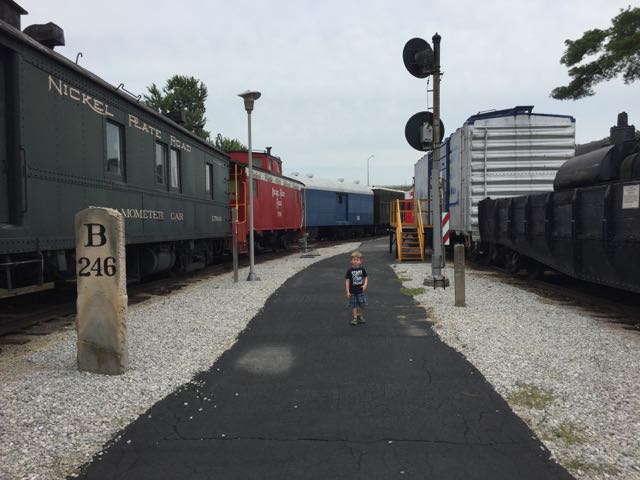 There are tons of trains on display here, may of which you can climb aboard! This museum has indoor and outdoor components and the gift shop has a train table for playing! 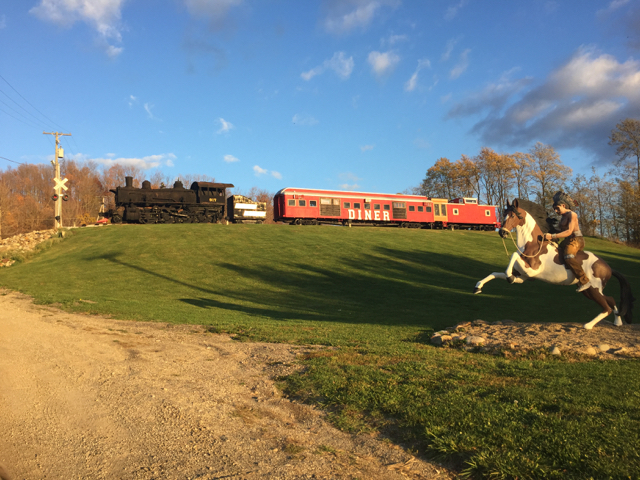 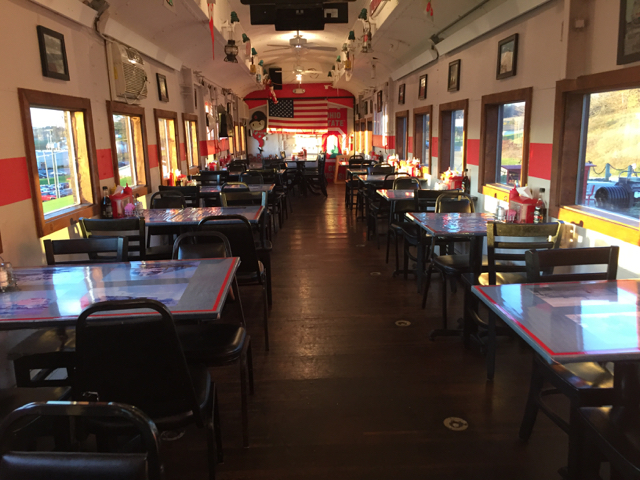 Eat dinner in an OSU-themed train car! There is a train playground outside too! 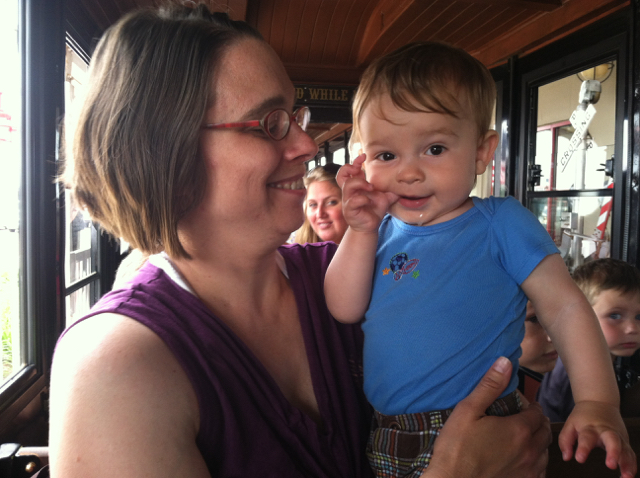 This outlet mall is built with a train theme! You can purchase tickets to take a train ride around the property!

This venue offers displays, a museum, seasonal rides and a funhouse!

30. Day Out with Thomas, various locations

These special days only happen a few times a year at Ohio locations and include a 25-minute train ride, kids activities, live music and more!

The trains here run mainly on the weekends and there are several events scheduled throughout the year, including a Christmas Tree Adventure!

This railway offers special trips throughout the year including a Santa Train on December 18, 2016. Tickets are limited.

This historic railroad offers special events including the Day out with Thomas and North Pole Express!

One of Ohio’s largest multi-gauge model railroad displays open to the public! Trains are for sale in the gift shop as well!

ICYMI: 5 Moms of Nationwide Share their Favorite Places to take their Kids in Columbus

November in Review: Amy’s Donuts, Louisville, Toddler Theater and More! | What Should We Do Today?

[…] The first weekend in November, my husband and I met my parents at the Buckeye Express Diner in Bellville, OH! I had been wanting to take the kids to eat in this train car for some time! I knew they would love it and I also wanted to personally experience it before including in my MEGA Train List! […]

26 Things to Do Thanksgiving Weekend in Columbus | What Should We Do Today?

[…] ICYMI: MEGA Train List for Central Ohio and Beyond […]

[…] ICYMI: MEGA Train List for Central Ohio and Beyond […]